It is the Iranian Shite Holy Islamic Empire in the making. 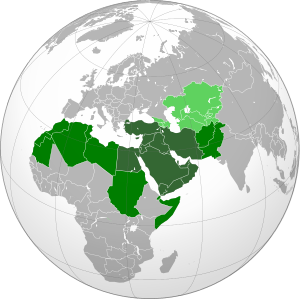 The upheaval in the middle east is not pro American as many would like to believe, its more like the Holy Roman Empire, except that it is not Christian this time, it's Ilam, and instead of the Pope the Arabs will have the Ayatollah, Al Azhar  will be replaced with Tehran and maybe a council of Ayatollahs.


The role of Charles Martel or Charles the hammer will be taken by Mahmoud Ahmadinejad.


That the Americans see this as an opportunity to stir confusion and take sides and hope to colonialise the Arabs with the current situation, what is really stirring the Arabs is a great deal of anti American sentiment driven by years of neglect of the common Arab by the governments in the region.
Arab governments have long thrived on the ignorance of the masses, an issue that is rather is not too far from what the BN government has and is doing.
Keep the ordinary man in the street ignorant, do not allow him to think, think for him all the time, so that he is completely dependent and you rule  the roost, this was the Mahathirian   ideology, those who could think, those who could question were purged, then we he appointed a successor we saw the results of this ideology..
This ideology is deep rooted in our education system, when school boys refused the book interlok they were sent to police stations, University students are so dependent on lecturer notes the great majority are not familiar with churning out their own, the ability to think and differ is not there, in fact in this system you can't differ it is a mortal sin to, students learn from the notes of the lecturers and that explains the quality of our University graduates.
In government service it is no different, no one thinks, UMNO thinks for them, and with UMNO filled with Malaysian graduates you will appreciate the current situation in the country. Why,  the don't think ideology is even practiced very high up in UMNO the hierarchy and that explains the stupid statements coming out from many a minister.
The problem is in the middle east is a Shite/Sunni problem, the Shite are on the rise, the Muslim brotherhood for instance is very Shite inclined, the problem in the Baath Socialist state of Syria is Iran inspired, Iraq will soon be under complete Shite control, there will be Sunnis in the cabinet but the Shite will rule the roost, the time has come for Persian greatness.
All Muslim nations will be under the influence of Tehran,  and sooner or later that will include Malaysia.
In Malaysia the Shite are treated with great suspicion, in Klang a Shite Mosque is not identified such, their faithful have to conduct their prayers discreetly in the confines of the Shite Mosque, and I dare say many a Malay living in Klang is  not aware of this Shite Mosque, it is situated in a locality where there is no Muslim resident. In fact if in new York the Government did that to Mosque the entire Muslim world have protested, and I do not think that is the way to treat Shite Muslims.
If the Iranians only knew.
So you see it is not an American problem, it is a problem for the Americans and in that sense it is an American problem.
The Kingdom of Saudi Arabia will be the grand prize, but to get at the Saudis the Iranians know they have to get rid of the Royalty, and the Iranians are experts at that, they did their own Shah, Mohammad Rezā Pahlavi on 11 February 1979., so no one in the Sunni world actually needs to teach them how to do it.
The Shite despise such rulers in fact, in the type of Islamic republic they have in mind there will be no such rulers, no monarchy and the leaders of the state are the clerics.
The Iranian plan  according to my friends Trabulsi and Omrani both in Libya is to convert all of Islam to Shite and this Arab revolution is what they the Shite of Iran have termed the revival of true Islam, a Renaissance of a kind.
After the Arab revolutions they will focus their energies on transforming the Arab world, following which the Islamic states of  the former Soviet Union, and South East Asia will just follow, it will be the natural course of events.
The Iranians foresee problems with Turkey and Xian Jian in China, these will be their greatest challenges.
The Malaysian government has to be careful in its treatment of the Shite, and people of other religions, as in Egypt and elsewhere in the Arab world the Arabs know what their options are, and they choose to go that way rather then suffer  under repressive and corrupt regimes.