How credible this rumor is, is anybody's guess, but then they have made out videos trying to paint the opposition in a bad light, this government is famous for videos, it is a Barisan specialty, said one Vijaendran of Dee Pees  video services.

He says the way this government makes videos he may be out of business soon.

There was of course the Chua Soi Lek Video, which was taken  live,  then there was one much earlier of an MIC leader I just can't get his name, and after having painted themselves in a bad light they decided to make videos with people who look like the opposition leaders and start demanding explanations.

For that matter the internet is so full of photographs of BN political leaders in   compromising positions most of which I must admit are all superimposed, but then there are pictures of children of very senior ministers and they do look genuine, but most Malaysians being decent human beings just  discard these pictures and want nothing to do with them , except for the BN photography and video specialists.

Remember Chua Soi Lek's video was brought about by people who wanted him out of the MCA and it must have been from within and that is why to this day the police have not investigated the case to find out who the culprits were. Chua Soi Lek is not a criminal, he is an innocent man, but those who filmed him have actually performed a criminal act that is a threat to the security of the nation - filming a minister in a compromising position they could have blackmailed him, imagine if they had made video of Najib in a similar position, the implications are very serious and yet to this day the police have come out with nothing.

Moving away from the video shows, Najib has just handed out RM15,000 to Felda settlers, and of course that is to buy votes. According to reports the children of Felda settlers feel shortchanged ans they feel the 15 thousand ringgit is nothing but small change, we can expect some fire fighting in that area too as Felda is the backbone of UMNO support, and it has been infiltrated by the opposition because of the corrupt practices of this government. They are now using corruption to justify corruption. 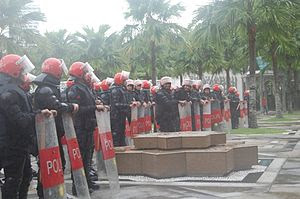 The FRU riot police units were placed at various places around Kuala Lumpur. A unit was on active duty at the Masjid Negara. (REFEASED) http://kl.metblogs.com/archives/2007/11/metblogs_reporting_on_bersih_r.phtml (Photo credit: Wikipedia)
They have so famously over the years worked on the principle that a Government that robs Subramaniam to pay Nazri  can always rely on the support of Nazri, but the irony in this country is that Subramaniam will notwithstanding this still support the Government.

When will Subramaniam ever learn.

That the  elections is going to be held soon could  very well be a rumor, with each Bersih rally the number of people aligning with the Pakatan goes significantly higher and Najib is losing a lot of sleep over it , it could be a rumor designed in  an attempt to halt another Bersih rally - Bersih4, because this blog and many more are sure that the next rally will draw in a million people and it's not only us who know it but Najib and his henchmen too.

They have the mechanism to play dirty they have passed the foul tactics act  in Parliament to make the elections a really dirty one, and are now waiting to put it into action the may feel that this is the right time, because they may be able to get away with cheating, but if the crowds get any bigger than we'll they are afraid the people will not  take it sitting down.

The Barisan is feeling the heat,  they are so afraid of the truth, from the judicial inquiry into the Scorpene deal which would  have been Najib's trump card if indeed he did not receive any bribes and was not involved in the Altantuya murder in any way to clear his name.

As it stands he is compromised by his very refusal to clear his name.

The latest offer by Frank William La Rue - the  United Nations special rapporteur on the promotion and protection of the right to freedom of opinion and expression to independently to investigate the Bersih 3 rally,  which saw both police and protesters hurt,  as a neutral person  was immediately turned down by the the country's foreign minister probably on the instructions of his boss - Rosmah Mansor.

Rosmah Mansor because Najib has always bragged about his wife's ability of influencing foreign governments, if you remember the repatriation of Malaysian students from Egypt at the height of the demonstrations there.

Hi excuse is that we are a Sovereign Nation of course we are but what he does not realise is that we have a corrupt government who controls the press and other media liek the TV, the Radio and the rest.

You will notice that they are taking an awfully long time to come out with the videos of what they call "proof" that they  have that the Participants and political leaders started the trouble at Bersih 3.

Remember what the mayor said before the rally, "They can try anything but we are prepared," they were prepared for all these from the firing of the water canon, to the tear gas, to the staged attack on the police conducted by their own people.

Hishammuddin's act of waving the keris (traditional Javanese dagger) at the UMNO Annual General Meeting in 2005 drew applause from the UMNO delegates. (Photo credit: Wikipedia)
This government is incapable of telling the truth, Najib has ordered his less intelligent home minister and cousin not to talk too much to the press, he is reported to have told Hishamuddin, " whenever you open your mouth  we have to rush to do damage control, so if you can,  please keep quiet about this and let me handle it." Then according to sources he turned to Rosamh and said, "the fellow will still open his big mouth, he is my biggest worry."