By Toffee
DO YOU STILL NEED TO READ THESE???? IT'S NOTHING BUT TRASH. 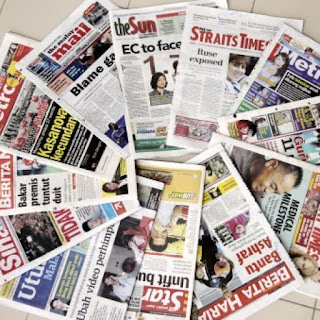 
MAKE THIS VIRAL, IT NEEDS TO WORK

LET'S ACT AGAINST FAKE NEWS - WE TOO CAN

Come tomorrow 14th April 2018, I am telling my newspaper man to stop my subscription of  my daily paper,  as I am sick and tired of the trash we receive in the local  press day in day out.

You get the sickening picture of whom I consider the worst Prime Minister ever of Malaysia taking a whole page and undeserved accolades make up the captions of that  page on a daily basis AND ARE YOU SERIOUSLY PAYING FOR THIS TRASH??? I suggest you think again and trash it an follow my example

The paper I have been buying  blatantly advertises the Barisan Nasional in full pages and it has refused that privilege to other parties.

In the past when other parties approached at least this one paper I know,  for which they were willing to pay, they were refused the privilege, a clear indication that it has lost its objectivity and is inclined to allow half truths flourish in its pages to undermine the other participants of the other parties vying to become government.

If you read the pother papers both English and the vernacular you'll find this one sided bandit in action and more vigorously so at these times leading to the elections,.

It is common knowledge that our papers are actually owned by political parties or persons or corporations closely aligned to them and  who actually  form the government, The New Straits Times, The Star, The Utusan, The Tamil Nesan etc. In fact every daily publication both English and the vernacular that means the Chinese press too are all aligned with Barisan National a  condition that is rather obvious to be given KDN's approval for publication I presume.

Political papers like the rocket are restricted to only the members of the DAP, not by the party but by this Barisan Government.

Now do you think it is worth supporting this media???

I urge all right thinking Malaysians to demand more, much much more, equal and balanced  reporting and the stories in full.

We only received what the government wanted us to hear of the 1MDB in the 1MDB case from the local media, most all the truth came from the foreign media and even Sarawak Report, and we got confirmation of all this when foreign governments began taking action against 1MDB and bankers involved in the same, when Joe Lo was implicated, when the Swiss Attorney General reported that cooperation with the Malaysian authorities were not forthcoming and most damaging of all when the Department of Justice (DOJ) of the US implicated not only Najib but family members in the scandal.

In the recent saga of the MINDEF land scandal we get Hishamuddin calling Rafidah a liar, but not coming out to substantiate that. I think when he does that he is acknowledging that he is one, otherwise he has to prove it, bring out the proof as requested by Rafidah.

Rafidah has asked him to produce the minutes of the meeting where this land deal was passed, but to date he has refused and refuses to even address that question.

Tomorrow I suppose they'll make  the  minutes of that meeting an official secret, but honestly I think they can't because they are just a caretaker government, meaning that Najib is for the moment only a "glorified jaga" and in that capacity he can't, so a reply to Rafidah providing the minutes of that meeting will be in order.

does he intend to go to a Mosque to take an Oath to say Rafidah is lying? that may be in order too, after all that is what he did in the Altantuya case, only that this time the people will demand to see the minutes of that meeting - Official Secret or otherwise.

What is even more interesting is that Rafidah has told us that there were "two men and woman" in that Company that had secured this deal whilst Badawi was PM and Najib was minister of defence.

Rafidah states that she  had categorically asked how was it that such a strategic asset was being  given directly to an unknown Company that was selected with the knowledge of the PM and the defense Minister only, and why the Lembaga Tabung Angkatan Tentra (LTAT) was not chosen instead.

She went further to suggest that with such an arrangement LTAT could then form a Consortium with Established Local Companies for the purpose of development, to which she received a reply telling her That LTAT will be brought it later.

What I am sure will be in the mind of every Malaysian including the staunchest UMNO member who is not already in the know is, "Who is the one Woman" in this 3 man Company".


I hope among the two men in this 3 man Company one is not a man who was also involved in a mega MINDEF purchase that turned into a mega scandal later on.

Rafidah has asked the PM directly to verify what she has said regarding this MINDEF land scandal.

Why is Najib quiet, it is he who should answer it and not third parties assigned by him, has he anything to hide?

Why is that all this and much much more,  are not in the daily newspapers we buy??

The answer is this government controlled media sucks up this regime.

The press is only a tool of the government and we are being fed with lies day in day out to deliberately  mislead the people, believe me if all of you stop buying the daily papers we stand an excellent chance of either getting them to make drastic changes and then we can go ahead and purchase the editions after the elections.

Well there is a lot more that the Press does not tell us. Let us put a stop to this one-sided fake news we receive from the press.

Call your newspaper man and tell him to stop your subscription today.

I urge all Malaysian to dump the daily newspapers, this wicked and nasty government controlled media,  at least for the period leading to the elections, once this is done it will hurt the press where it matters most. Advertising revenue will fall and without circulation it is the end.

Stop your papers at least till the May 10th.

OBITUARIES  can be posted on face book ask your friends to make it viral YOU'LL GET MORE COVERAGE, and they will, sports news can be obtained on line, stock market on line too, nothing to really hold us back.