THIS BLOODY MORON MUST KNOW THAT IT WAS THE OTHER PEOPLE OF ALL RACES  WHO WERE PATIENT AND TOLERANT, NOT THE BLOODY ARROGANT AND IGNORANT UMNOPUTRAS 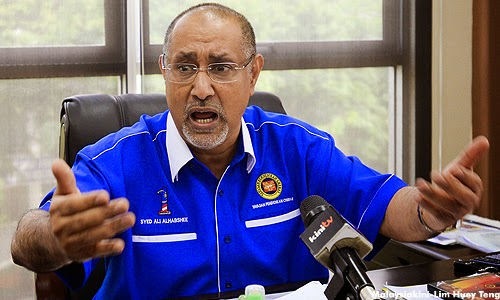 Malaysiakini reported that " An Umno division leader has called on all races, especially the Chinese, to emulate the Malays who are patient and willing to compromise."

The report went on to say he said,  “The Chinese must understand that Malays are ‘tuan’ (masters) in this country, they must also understand that it is because the Malays are willing to compromise that they (the Chinese) can carry out all sorts of activities, especially in the business sector,”

Go tell this to the millions of Malays you have fooled all this while, many who do not even have enough to put a shirt on their back, and the nest time you talk please differentiate between Malay and UMNOputera.

Syed Ali You are an idiot, for an UMNO division head without any knowledge of your own history you are a confounded fool.

The late Tun Dr. Islmail likened the NEP to a handicap which “will enable them to be good players, as in golf, and in time the handicap will be removed. The Malays must not think of these privileges as permanent: for then, they will not put effort into their tasks. In fact, it is an insult for the Malays to be getting these privileges.”


What Bloody "patience" is this Syed Ali talking about, he is a Malay of convenience, calling himself a Malay sometimes and an Arab at other times, it is the other races and the poor betrayed Malays,  who have been patient with UMNO and he has to understand and accept it, because that is the truth the plain truth and nothing but the truth.

The Malays are not ethnic people in Malaysia the Dayaks the Ibans the Orang Asli are the ethnic people of this country if there are to be privileges it is for them and not the UMNOputera, what is he talking about Ketuanan?  The Malays got the privilege because of what Tun Dr. Ismail rightfully called the "handicap"  the UMNOputras shoudl be grateful for all they got at the expense of the real natives and the Malays they shortchanged.

It was the non Malays who were patient all this time to allow the Malays and the Bumiputeras  special privileges now he seems to be taking it over his head and he is talking about "Ketuanan" superior race?  He doesn't realise that he is stepping into the shoes of Nazism and Hitler and that to is not acceptable in our world.

This idiot who lives in his own cocoon is no ordinary person, he is an UMNO division Chief and we all know what that carries.

We have to keep this piece it has gone unchecked by the UMNO supreme council and it amounts to an admission that the UMNO led government is an Apartheid government. Strangely enough the white majority government at the time of apartheid had a membership of many groups who worshiped Hitler and said the very same things this man is saying.

Apartheid is outlawed, South Africa had to pay a big price for the apartheid regime and  the Tengku was one of those  who initiated the sacking of South Africa from the Commonwealth for that system of government and the breaking off  of trade relations with South Africa.

Nazism we sacked it, Humanity sacked it from this world but it now seems to be rearing its ugly head via UMNO.

These facts have to be taken to the world stage, we must let the world know our plight before these people do more damage. We have to address this at the UN where the Malaysian Prime Minster paints a very different story.

UMNO needs to be eradicated,  it is not the original party founded by Onn Jaffar it is UMNO Baru of Mahathir built on this principle of "Ketuanan Melayu" it is  a Fascist party.

Way back in 1969 when he was a candidate for election in Kedah he told the Chinese in his constituency not to vote for him as he would not be representing them in Parliament, at that same time he came out with this idea of ketuanan Melayu, saying that "citizenship given to Malaysians of other races was given only with the consent of the Malay,"  and he went on further to add that that "consent could be withdrawn" that was the birth of this idea of "Ketuanan Melayu" by a Malaysian of  Indian origin who would later claim he is Malay, Mahathir.

At a time when there was a high level of unemployment he hired Chinese Driver not because there were no Malays around but to show the world that a Chinese was his driver, he was sending the Malaysians a message of the "Ketuanan Melayu" and in the process deprived more deserving Malays of the job,  that  did not matter to him - his ego did.

That is Mahathir and that is where this "ketuanan" came from, he founded UMNO baru and it is now implanted in the mindset of the UMNOputras.

Let us get this straight we are all Malaysians just like Mahathir Mohammed himself, and this semi Arab Syed Ali, who'll call himself an Arab when it suits him and a Malay at other times, they are all children of immigrants just like us.


Mahathir has his origins in Kerala that is where is father comes from, and this Syed probably in the slums of Somalia, and they call themselves Melayu, it was not they who were patient it was the other communities who were patient all this while, allowing them the special privileges.

If Mahathir is entitled to all those privileges I'd like to ask why my childrenand grand children can't.

I was born in this country my parents both arrived from India and were citizens just like Mahathir's dad. I married a Chinese whose father was born in Malaysia, who had a Malayan Birth Certificate,
and who was a citizen by operation of law, that means she does no have a citizenship certificate, because she is a citizen by operation of  law, now what does that make my children, are they not entitled to better rights than Mahathir Mohammed?

Anyway we are nt the type of people who like to ask for special privileges, we prefer to get what we deserve for the efforts we put in, we do not want to deprive others of anything just because UMNO did it, we are different, quite different, to us all men are created equal.

It is time we stood up and said times up, no more privileges for UMNOputras, what they  stole from the allocations to the Malays and other bumiputeras need to be accounted for and returned, and  Malaysia for Malaysians.